Now that companies like Apple, Google and Samsung are no longer including power adapters with new phones, getting the right charger for your device is a little trickier than it used to be. And while it hasn’t happened yet, given the increased focus on reducing e-waste and expanded support for USB Power Delivery (USB-PD), I wouldn’t be surprised if that trend crosses over into the laptop market sometime in the next five years. So to help sort out the confusion, I gathered 14 different chargers from a range of brands and tested each one with five different devices to find out which one is the fastest.

The methodology for my experiment is intended to be as straightforward as possible. I drained each device to 10 percent battery, plugged in a power brick and then recorded the amount of charge added every 10 minutes for an hour. Each adapter was plugged directly into a standard 120-volt outlet (without the use of a power strip or any extension cords), and when possible I used the cable that either came included with the battery charger or one made by the same manufacturer as the device. If that wasn’t an option, I used certified 100-watt USB-C cables made by Anker, Apple and others.

Because the charging rate for devices varies depending on how much juice you have, I wanted to measure how well each adapter was able to match each gadget’s optimal charging speed. Generally, charging is slower between zero and 20 percent before speeds ramp up until the battery hits 80 percent, at which point things slow down again to protect and preserve the health and longevity of the power cell. For chargers with multiple ports, I always selected the port with the highest power output while also not having any other devices connected.

As for the devices themselves, I selected an Apple iPhone 13, a Samsung Galaxy S22 Ultra, a Nintendo Switch (a launch model from 2017), a 2021 Dell XPS 13 and a 16-inch M1 Max MacBook Pro. This assortment was chosen to cover a wide range of power draws from 20 watts (iPhone 13) all the way up to 140 watts (M1 Max MBP). Also, every system was tested while idle (i.e. no additional apps or games running) in order to ensure consistent results.

One important thing to note is that while the USB Implementers Forum has approved support for USB Power Delivery (USB-PD) charging at up to 240 watts, adapters that actually support that power output don’t exist yet. Additionally, while there are a handful of cables that can handle more than 100 watts of juice, they are somewhat rare or hard to get.

With so many different chargers of varying power outputs to test, I broke things down into three categories. There are the 30-watt and under chargers, which are primarily designed for phones and other small mobile devices. Then we move up to 45 to 65-watt chargers (give or take a watt or two) that can handle things like phones along with a number of thin and light laptops. Finally, we have chargers that output 100 watts or more, which are good for pretty much anything besides the biggest and most power-hungry gaming laptops. Many of these higher wattage adapters also feature multiple ports, so can you top up additional devices at full speed. However, because not every power brick supports multi-device charging, I didn’t include that as a testing metric.

You can see a full list of the chargers we tested below: 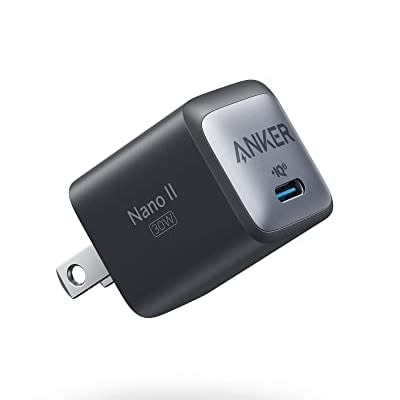 If all you want is a power brick to keep small devices powered up, our choice for best charger is clear: Anker's 711.
$30 at Amazon

When it comes to charging small devices, 30 watts is by far the most popular as it covers most phones along with some larger devices like the Nintendo Switch. In our testing, all of the 30-watt chargers performed equally well, with each one able to get the iPhone 13 to around 80 percent battery charge in less than an hour while also completely refilling the Galaxy S22 Ultra in 60 minutes. However, as you can see, these smaller, low-wattage bricks struggled to refill both the XPS 13 and especially the MacBook Pro. Yes, you can do it, but it's rather sluggish (the XPS 13 even surfaced a slow charger notification), and because I tested each device while idle, there’s a good chance these chargers may not be able to keep these laptops topped up while under load.

However, the one thing that sticks out is the performance of Apple’s 20-watt brick, whose lower output caused it to lag behind every other adapter. While it was able to keep up with rival devices when refilling the iPhone 13, its wattage is so low it couldn’t even trickle charge the XPS 13. Dell’s power management did not even recognize that a charger was plugged in. That means this adapter is much less useful if you need to charge more power-hungry gadgets in a pinch. And I should mention I didn’t bother testing the old 15-watt Apple power cubes, which can’t even support the iPhone 13’s full 20-watt charging speeds. Anyone still using one of those really ought to upgrade.

Charging speeds for various 30-watt power adapters when connected to an iPhone 13.

If all you want is a power brick to keep small devices powered up, our choice for best charger is clear: the Anker 711. Not only did it deliver the best speeds in its class, but it's also the smallest, which makes it super easy for it to disappear in a bag. 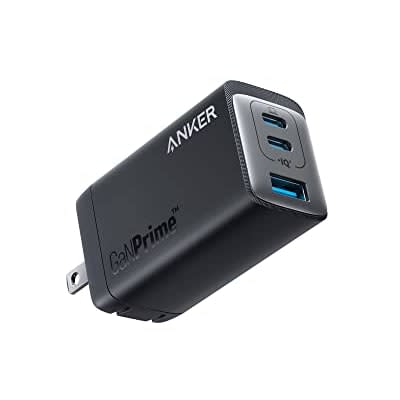 Despite a lot of good options in this range, Anker's 735 edges out the competition thanks to its compact design and total of three USB ports.
$60 at Amazon

Here’s where things start to get interesting because while a number of these chargers have similar power outputs (aside from the Samsung 45-watt brick, of course), the actual results were a bit more varied. Both the Nekteck and the Belkin only managed to get the S22 Ultra to around 80 percent battery after an hour, compared to the Anker, Samsung and Satechi chargers which all hit 100. This suggests that both chargers aren’t properly communicating with the S22 Ultra in order to take advantage of its 45-watt charging speeds, which I was able to confirm by using a USB-C volt meter. Meanwhile, as expected, Samsung’s 45-watt charger did great when connected to the S22 Ultra, but its lower output meant it could not keep up with the 60 and 65-watt bricks.

Somewhat surprisingly, every charger in this category performed well when hooked up to the XPS 13, with each adapter finishing within one percent of each other (around 58 percent) after an hour. However, when it comes to the thirsty MacBook Pro, every extra watt makes a difference, with the Anker 735 and Samsung Triple Port Charger edging out the competition, even though they’re still much slower than Apple’s included brick. It’s also telling that on the Belkin 60W, its fastest charging port actually denotes charging speeds of between 50 and 60 watts, which is why it couldn’t quite keep up with the other 60-watt chargers I tested.

Charging speeds for various 60-watt power adapters when connected to an iPhone 13.

As for picking a winner, Nekteck’s 60-watt brick is the cheapest while also being one of the few options that come with an included cable. However, with only a single charging port and sub-optimal compatibility with the S22 Ultra, it’s hard to fully recommend. For my money, I’d go with the Anker 735 as it's smaller, slightly faster and the same price as Samsung’s 65W Triple Port charger, while still offering a total of three USB ports (two USB-C and one USB-A).

Best 100-watt and up charger 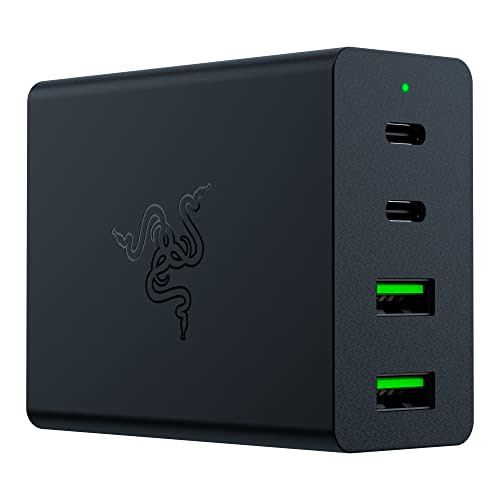 For anyone that wants a charger that can top up an ultraportable laptop quickly while still having juice to spare, Razer’s 130-watt GaN adapter is a solid choice.
$180 at Amazon

For anyone considering a fast high-power USB charger, here’s where it’s important to pay attention to the fine print. While all of these bricks are listed at or above 100 watts, the primary charging ports on the Satechi and Belkin are actually capped at 90 or 96 watts. And that’s before you consider multi-device charging, which splits the total output across the other ports with the ratio varying depending on the specific model.

During testing, all four had no issue topping up the phones, the Switch and the XPS 13, though once again Belkin’s adapter couldn’t fully recharge the S22 Ultra despite having more than enough wattage. On the flip side, while Razer’s charger has a higher max output than either the Belkin or the Satechi, there wasn’t much difference in charging speeds when connected to the MacBook Pro. And this isn’t due to a lack of higher wattage cables, as both USB-C ports on the Razer brick are capped at a combined 100 watts.

Charging speeds for various 100-watt or higher power adapters when connected to an iPhone 13.

Meanwhile, as one of the rare 140-watt power adapters on the market, Apple’s brick is super quick and did an expectedly great job of refilling the MacBook Pro. However, I should mention that it's the only power brick in this segment that comes with a single port, which kind of feels like a missed opportunity for the Apple ecosystem.

So for anyone that wants a charger that can top up an ultraportable laptop quickly while still having juice to spare, I prefer Razer’s 130-watt GaN adapter. It’s the best charger in this category, as well as the smallest and most expensive at $180. On top of that, it comes with two international wall adapters (for UK and EU outlets) and a braided 100-watt USB-C cable, all of which you don’t get from any others in this category.

Obviously, there are a lot more than just 14 chargers on the market, and sadly I don’t have the time to test them all. These days, discharging a phone from 100 percent battery to dead can take upwards of 15 hours, so depending on the device, I can only test one power brick per day. Just gathering all this data took the better part of two months. And unfortunately, while I was running this test, Anker came out with a new generation of power adapters that I haven't had the chance to evaluate just yet.

That said there are still some important takeaways. First, in order to ensure optimal charging speeds, make sure your charger can supply the proper amount of power. Manufacturers typically list a device’s max charging speeds, while power adapters clearly label their outputs. And when in doubt, you can look at the fine text on the charger itself, though you might have to do some math. Just remember, watts equals volts times amps. Furthermore, in the case of adapters with multiple ports, you’ll check to see how its total wattage is split when connected to multiple devices.

Then there are other factors like size and weight you’ll want to consider, with newer gallium nitride adapters (GaN) often featuring more compact designs and better power efficiency. And if you’re ever truly in doubt, you can simply opt for a charger made by the same company as your phone, laptop or other gadgets, something that’s especially true for devices like the OnePlus 10T that feature speedy proprietary charging protocols.